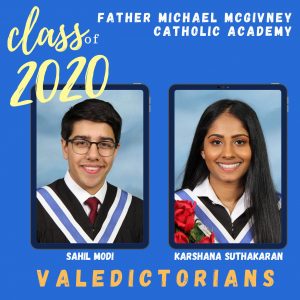 The FMM community is so proud to announce that the 2 Valedictorians for the Class of 2020 will be Sahil Modi & Karshana Suthakaran.

Here’s a little bit about our amazing 2 young leaders:

Over the course of his 4 years at McGivney, Sahil Modi, an Ontario Scholar, has represented the school and his community through his academic, athletic and extracurricular pursuits. His experiences have taught him the value of leadership and the importance of being a facilitator for positive change. As one of the committee Chairs within the Student Leaders at McGivney (SLAM) team, where he organized Lenten food drives and casserole drives. As President of DECA, Sahil lead his Executive team to triple the school representation at the Provincial competition in 2020 where Sahil and his partner were declared both Regional and Provincial champions for the 2019-2020 academic year. This qualified them for the International Career Development Conference/Competition in Nashville, Tennessee. Sahil was also a member of the Peer Mentorship team and has spent a greater part of the last year assisting Gr. 9 students through their high school experience. In terms of sports, Sahil was Co-Vice–Captain of this year’s Varsity Cricket Team, and lead the team to a first place finish at the York Region Athletic Association tournament which secured the team a berth in the Ontario Mayor’s Cup. In addition, Sahil has been a member of the Badminton Team all throughout his high school journey, and he was the coach for the Junior Badminton team this year. Finally, in terms of his community engagement, Sahil has spent significant time volunteering with the City of Markham, serving as a youth group leader focused on spiritual growth and community service and tutoring students in French. In recognition of all his efforts, Sahil was honoured with a varsity letter from the School.

This fall, Sahil will be attending the Schulich School of Business for the Bachelors of Business Administration (BBA) program, on a scholarship. Although he is currently unsure of his area of specialization (i.e., finance, accounting, marketing or consulting), he is eager to explore the various facets of commerce, and understand how they can be used to create and nurture ethically responsible businesses, as well as address societal issues such as climate change and scarcity. Regardless of which area he ultimately specializes in, his goal is to one day attend Harvard University and obtain a MBA. He is certain that his experiences over the past four years at Father Michael McGivney Catholic Academy will serve him well in his future pursuits and academic endeavours.

Karshana Suthakaran, currently a Grade 12 student in the IB (International Baccalaureate) Programme, has stated her pride in being chosen as this year’s Co-Valedictorian and considers it an honour to represent her Class. She reflects on the many memorable moments at McGivney and what a truly a magical place it has been on her journey. As the current Student Government President and a member on the council for four years, she has had the opportunity to organize several events including Semi-Formals, Movie Nights, fundraisers, Talent Shows, and Student Appreciation Days. As well, she served as a chair on the Service and Justice Team and have been a member on SLAM (Student Leaders at McGivney) for four years. This council allowed me to serve my community through countless initiatives including the sandwich runs in downtown Toronto, Casserole Drives, and volunteering at Seniors’ homes. As a mentor in the Peer Mentorship Program, I was able to support younger students through workshops and discussions. Outside of school, she has also spent a significant amount of time volunteering in the community at hospitals, summer camps, and a children’s daycare.

This fall, Karshana will be attending Western University for Medical Sciences with AEO (Advanced Entry Opportunity) status and as part of the Scholar’s Elective Program. She hopes to pursue a career in the medical field. In the future, she would also like to use her drive in leadership for social justice and to pursue political change. As she graduates and moves on to new experiences, she hope to bring the values of servant-leadership, dedication, and compassion along with her.

We are so very proud of these 2 outstanding school leaders as they close this chapter at FMM and move onto the next step in their life journey. Many blessings to both Karshana & Sahil!