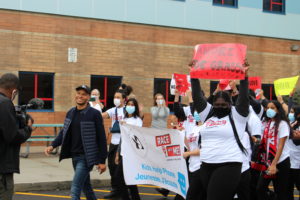 Six-time Olympic medallist, Andre De Grasse, returned to his former high school, Father Michael McGivney CA on September 23rd as part of a special event that recognized co-creators of his Race with Me Virtual Challenge, which many students at the Markham school participated in last spring.

At the start of 2021, 14-year-old Montrealer, Jesse Briscoe was frustrated by the cancellation of his sports clubs and was getting tired of sitting and playing video games. Jesse was inspired by the incredible track performance of De Grasse and his mission to inspire young Canadians to get moving. Along with his father, the Briscoe family co-created the Race with Me Virtual Challenge and worked with Andre De Grasse and his foundation to get kids back on track.

When students and staff at Father Michael McGivney CA learned of the virtual challenge last spring, they got onboard, and many of the school’s students participated in the 8-week event, which encouraged youth to run track weekly while also generating awareness of the importance of physical activity and youth mental health, in support of Kids Help Phone.

Students and staff at Father Michael McGivney were particularly inspired by Andre De Grasse as he is a former student at the school!  On September 23rd, there was a cheque presentation to Kids Help Phone with a donation of $25,000 that was realized from the Race With Me Virtual Challenge. Many special guests attended the cheque presentation, including the following people who spoke to an audience made up of media, students, staff and supporters:

Before the official presentation, Andre and his mother Beverely, were greeted by approximately 300 Father Michael McGivney students and staff who gave him a heroes’ welcome home.

A special thanks goes to student emcees for the event, Jada Hunter and Sukh Thukral!