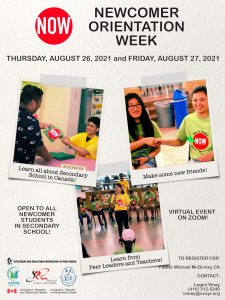 The Newcomer Orientation Week (NOW) is a five-day program in the last week of August for students in York Region, who have recently arrived in Canada. The Virtual Module will include:

NOW was launched by the federal government in 2008 and Father Michael McGivney CA was one of the schools in the province of Ontario which successfully conducted the program. It is fully funded by Immigration, Refugee and Citizenship Canada as part of the Settlement Workers in Schools (SWIS) program with support of the York Region District School Board and York Catholic District School Board.

For summer 2021, the Settlement and Education Partnership in York Region (SEPYR) team will implement NOW in a virtual delivery model at Father Michael McGivney Catholic Academy.

The program is open to students who have arrived in Canada over the summer or in the last months of the previous school year and incoming Grade 9 ESL from feeder schools.